In conversation with artist Michail Nogin

Russian born artist Michail Nogin, creates his so-called “Nigonographies”, which are light painting images, using an innovative technique merging figurative shapes, graphic illustrations and the photographic portrayal of their interaction. The images are taken with antique analogue cameras and are created without any assistance of digital technology. Nogin currently lives and works in Vienna, Austria.

Nogin’s work is exhibited at Ebony and Co Moscow’s art space. You are welcome to check it out any time. 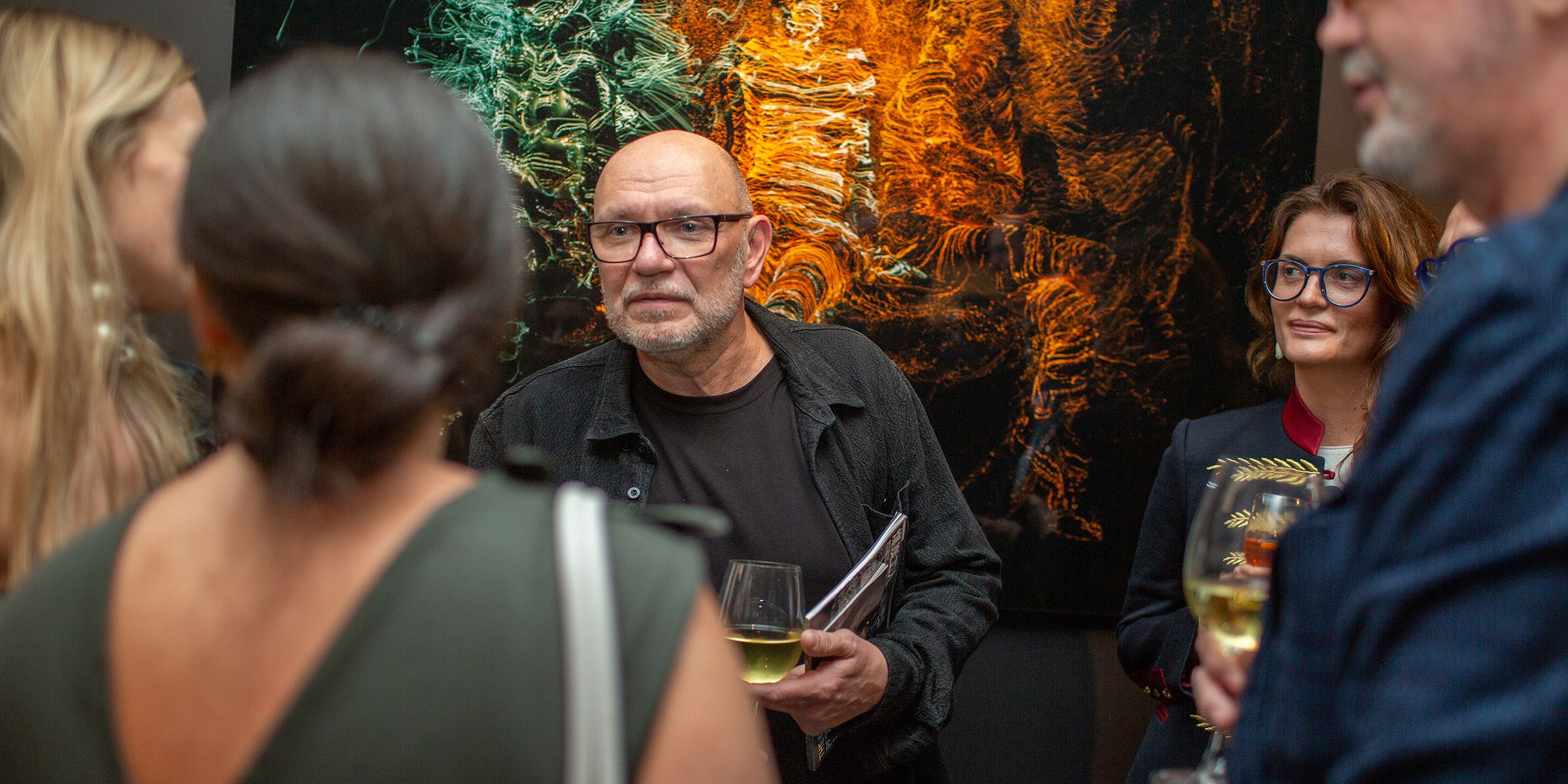 How did Nigonography come about?

Initially, the development of the technique that I use to create my works came to me as a result of my persistent fascination with light. About 7 years ago, I first started experimenting with laser and pieces of geometrically deformed cast glass in a small and entirely dark room. The results were mesmerizing; the room and all the objects disappeared into oblivion, and a giant ghost made of light came alive. This creature filled the space with its forms and mystical transformations. The slightest movement or change of angle where the laser hits the glass would entirely change the forms and shapes the light transforms into. Those experiments led me to the idea of creating images of figurative shapes where the figure itself disappears and what would be left is the symbolic image of the figure in light. Gradually the laser was replaced by light and the tools I work with were adapted and “reinvented”, so I could achieve the desired results and create linear graphic images of bodies and objects. I suppose that my understanding of forms and proportions gained in a lifetime of work as a sculptor added to the mix and played an essential role in implementing my ideas.

The choice of working with analogue technology is easily explained by my passion for antique analogue cameras, which I have been collecting since my early childhood. At no stage of the process, I do not employ any kind of digital technology, meaning that the images are purely analogue, taken with mid-format cameras (Hasselblad 501C, Hasselblad 501CM). The photographs are not even retouched with Photoshop afterwards. I like to think of my work as a symbiosis of figurative shapes, graphic illustrations and the photographic portrayal of their interaction.

How can Nigonography work in interiors?

The images created by this technique do not have to be exclusively figurative, they can be taken of almost any object, or even entirely abstract colour-light ornaments, in various colour schemes. In addition to the way, I have to chosen to produce my artwork, namely on ChromaLuxe, modern technology also allows such images to be printed on a special transparent film, which can then be enclosed between two glass plates. Such glass elements can be used as stained glass windows or even entire glass walls, dividing spaces or as illuminated panels, for example even with water streaming down the plates, which adds another element to it. The lighting plays a big role and brings out the best in the images; methods of illumination can be various, ranging from simple LED panels to complex devices, changing colours and shades of the image, depending on the programming. I believe this technique has great potential in terms of providing solutions for modern design projects.

Where do you get the inspiration for your work?

"When I look attentively
I can see the Nazuna
Blooming on the hedge!"

I make an effort to allow my soul no laziness. I try to see things that others do not see, which often proves to be not an easy task.

Which artists would you say influence your work?

Artists grow through the artists who came before them. I was lucky enough to get my hands on great art catalogues and books starting a very young age. Those readings had a huge impact on my development and artistic career. The works of pictorialists have always fascinated me; the enigmatic nature of the images, the suggestion of the forms, the magic of light, the interplay of all those elements creating a piece of art. Of course, my work is far from this style, but I also strive to apply some sort of a mystery, something "unspoken" in Nigonography; and of course, also my main instrument is the light.

I'm a big admirer, or you might even say "fan", of some well-known photographers, but most of all I like black/white and monochrome photography. Frank Eugene, Alfred Stieglitz, Rudolf Koppitz, Man Ray, are just to name a few.

Where do you think your journey will take you in the future?

Into the unknown filled with the unexpected. I do not know what I might come up with tomorrow!

Ebony and Co crafts luxury hardwood elements including flooring, wall panelling, cladding, decking and parquetry. Our talented sales team is committed to providing exceptional client experiences worldwide. Our personalised approach and uncompromising attention to detail allows us to surpass our competition in quality and service.